Skip to content
Press Enter / Return to begin your search.

Happy 2018, all! I’m currently vacationing in Florida, where it’s not exactly a tropical wonderland but it’s warmer than the frozen tundra of New Hampshire. I just spent two days in the World of Diz, watching my toddler run around like a little nutball and laughing with my bro over how ridiculously terrifying the DINOSAUR ride is. I love it but I literally have to tell myself, “Erin, you’re fine. You are not going to get stuck in the Cretaceous period. You are not actually in the Cretaceous period. This is Disney World.” I’ve seen more tweens lose their shit on that ride than any other ride in the parks, even when their happy-go-lucky younger siblings fare just fine. Given that, I’m convinced the ride plucks at some sort of deep, extinction-based existential dread.

But I digress. You’re not here to read my philosophical ramblings about theme park rides. You’re here to read about the time I sat there like a bump on a log when a thoughtless sixteen-year-old dude said something heinous about three of my favorite people: Carrie Brownstein, Corin Tucker, and Janet Weiss, otherwise known as the members of Sleater-Kinney.

In case you’re reading this and wondering what the hell his whole #YAMyLife thing is, here’s a link to the inaugural #YAMyLife post, in which I explain that I’m going to give a few cringeworthy moments from my teenhood a YA re-write, starring me as a YA badass instead of the trembling mess of nerves that I actually was. I also want to note that I mentioned the incident discussed below in this post, but here I’m going to delve into some serious context and all the nitty gritty details.

The year was 1997 and I was fifteen. Not old enough to drive, but old enough to know that I liked boys even though most of them appeared to be light years behind me when it came to emotional development. There were exceptions, of course, and even the boy in this story had many sparkling moments of maturity and sensitivity. But this was not one of them.

Sleater-Kinney’s second album, Dig Me Out, had been out for just a few months, and I’d resorted to buying it online after striking out at a few of the local record stores. Once I got my greedy hands on it, I had a hard time separating myself from the headphones of my Discman. (Yes, we used to carry around portable CD players. iPods were not yet a thing.)

I was sitting on my porch, listening to Dig Me Out and combing through the liner notes for the zillionth time, when this boy and a mutual friend of ours came over to see what I was up to. Since he was a fellow music nerd, he asked me about Dig Me Out as soon as he spotted the album cover, which is featured either above or to the left if you’re looking at this on a computer instead of a phone. I said something to the effect of It’sSoFlippingAmazingYouMustListenItWillChangeYourLife, and he responded with the following sentence…

“Those girls are so fucking ugly.”

I mean…jeezus. For a self-conscious fifteen-year-old girl, it was the kind of sentiment that made the world feel like a pit of despair. It filled me with rage and, at the same time, made me want to just give up on life. Because if the women of Sleater-Kinney couldn’t win, surely I didn’t stand a chance.

I’m pretty sure I flashed him a look that conveyed only a fraction of what I was feeling, and then we moved on with the day. Because that’s what you did when you were a self-conscious fifteen-year-old girl growing up in a small-minded little town in the late-90s, both of which were chock full of awful.

Below is what I wish would’ve happened. Obviously, the guy in question’s name has been changed.

“Is that the new Sleater-Kinney CD?” Steve asked as he stood at the edge of my porch.

“Yeah. It’s, like, really good.” I handed him the liner notes.

“Those girls are so fucking ugly,” he said. At that moment, the birds in the trees stopped singing and sky went Dimetapp-purple.

“You fucked up, Steve,” I said with a world-weary sigh. “The bullshit that just came out your mouth was so gross it ripped a big ass hole in the fabric of spacetime.”

I stepped off the porch and gestured toward my mom’s garden. “You know what? It’s cool. I have a time machine. We can fix this. Step inside, if you want to save the world.”

“Dude. Get inside before the Langoliers eat you.”

Once inside, I pecked at a bunch of blinky buttons that went beep boob beep. In a whoosh and a flash of light, and after that gross feeling you get in an elevator except times a thousand, we found ourselves at the photo shoot where this pic was taken. 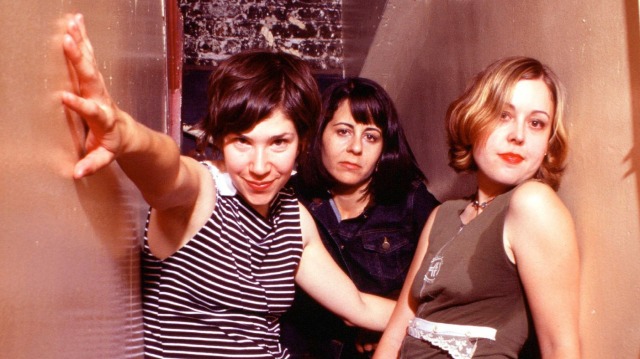 “Right? Look at those badass bitches. I want to have a like a zillion of their babies.”

“Just roll with it, Steve. Because here’s the thing. We’re growing up in the late-90s, which sucked in general and reeeeeeeely sucked for feminism, but shit’s gonna change.”

Steve nodded. “Cool. I don’t really know what any of that means but these girls are hotter than I thought. Even though they don’t look like Jenny McCarthy, they have their own thing going on, you know?”

I resisted the urge to slap him. “Yes, they’re hot, but they’re so much more than that, okay?”

“Get back in the time machine,” I huffed.

I punched some more buttons and we emerged from the time machine in the middle of this video.

“Yup. Pretty cool, huh? These characters are from Bob’s Burgers, which is a show we’re going to love when we’re thirty.”

“Not as good as The Simpsons though, right?”

I grabbed him by the face and stared deep into his animated eyes. “Better.”

He wriggled out of my grasp. “Sorry, this song is just kicking so much ass I gotta move. And the chick singing this one is ruling my world right now.”

“That’s Carrie Brownstein and she’s a force of nature. Also funny as all get out. Someday she’ll do a sketch comedy show with Fred Armisen from SNL.”

“It’s okay. You don’t have to wrap your brain around that right now. The point is that these are women of many talents, and the future is going to bring us so many amazing things.”

“Yes! I’m ready for the future!” he shouted as he started pogo-ing with Louise.

I grabbed his hand. “Good. Because we have one more stop.”

We got back in the time machine and traveled to the 9:30 Club in Washington, DC, right as the band was in the final throes of “Words and Guitar” at this concert.

“What year is it?” Steve shouted in my ear as he gazed back at the rabid crowd.

“What?!?! That’s, like, almost twenty years after they recorded Dig Me Out.”

“Yes, because this is a band with staying power.”

When the band launched into “Entertain,” Steve turned to me with wide eyes. “Erin, I think I’m having one of those moments when, like, the way you look at the whole world changes.”

“Yeah. We call that an epiphany.”

He nodded. “I think I get it now. They’re hot, but they’re also a kickass band. And not a girl band. They transcend the whole girl band label. They’re a kickass band that happens to be made up of three girls. Er…I mean women.”

I patted him on the back. “That’ll do, Steve. I think we just saved the world.”

“I can’t wait for the future,” he said as we turned back to the stage. “And all the fetishism.”

“Feminism, Steve. But I’ll let it slide this time.”